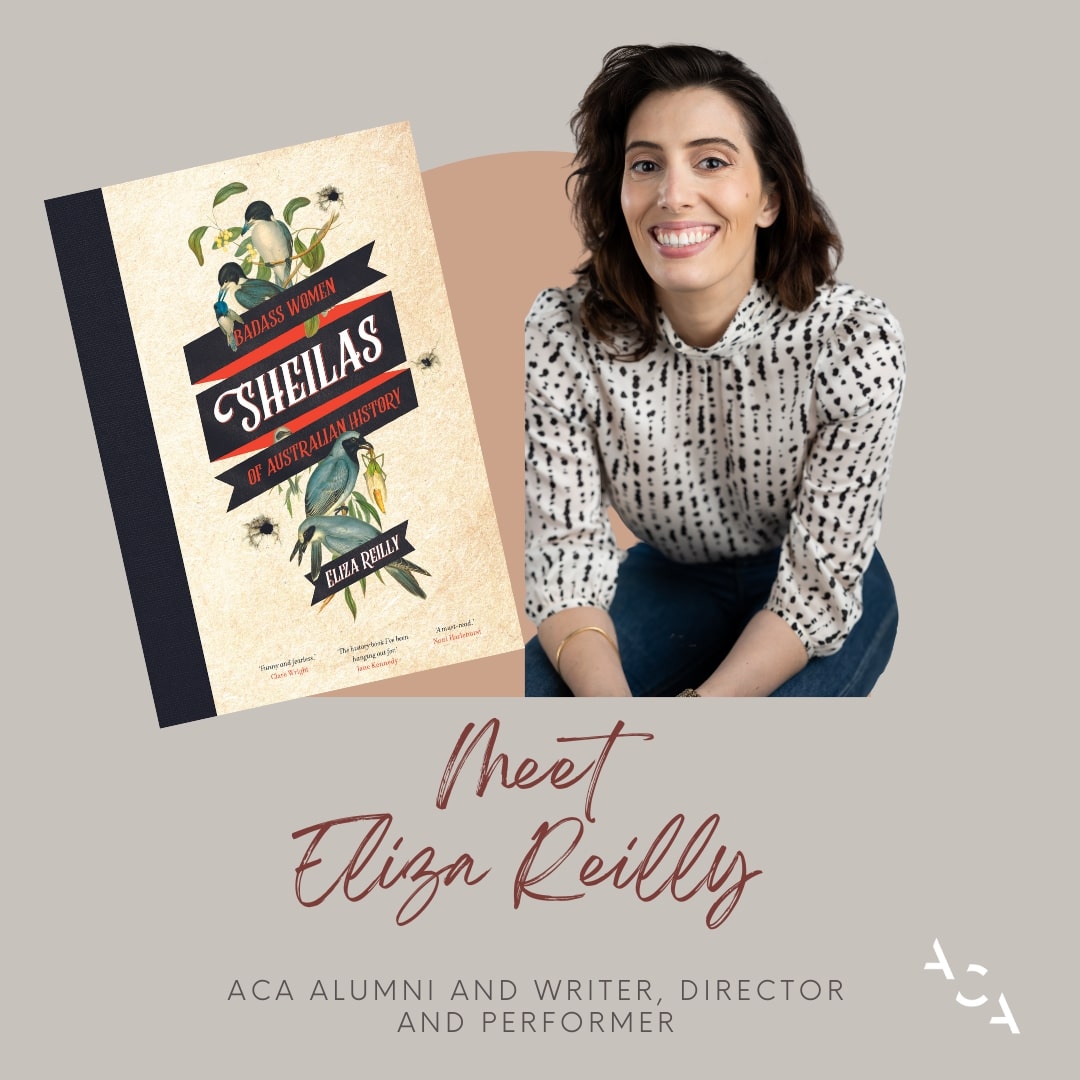 Eliza Reilly is a writer, director and performer and a graduate of Actors Centre Australia (2014). ACA is proud to highlight Eliza and her tremendous achievements in the arts.

Her debut book Sheilas: Badass Women of Australian History is described as an entertaining romp through Australian history that celebrates the badass heroes we were never taught about in school and who deserve to be printed on our money, goddamn it!
And it certainly does not disappoint!

In 2018 Eliza co-created the comedy web series SHEILAS with her sister Hannah. Previous to this Eliza wrote, directed and performed in ABC1’s GROWING UP GRACEFULLY featuring sketches that have been viewed more than 15 million times on the ABC Facebook page and also features voice overs done by ACA’s Jennifer West (Head of Voice).

Eliza co-hosted GIRLS GONE MILD on FBI in Sydney for 5 years and her writing has been featured on ABC’s Radio National, Syd Comedy Festival, Sydney Writers Festival and ABC TV’s THE CHECKOUT. In 2018, Eliza and Hannah wrote, directed and staged their original production of YARRAMADOON, a musical/comedy which sold out Belvoir Downstairs.

ACA recently had the opportunity to chat with Eliza to encapsulate the inspiration behind writing Sheilas and giving some advice to current ACA students.

Eliza: Learning about World War II and one of the most wanted women, that the Nazis were so scared of, Nancy Wake. Upon researching I was so surprised to learn that she lived just a stone’s throw away from my high school history classroom (Cremorne, North Shore in Sydney) where I was ironically learning about male convicts and war heroes in my history class. She (Nancy Wake) was so close to home, we didn’t learn about her in history until years and years later, and that really inspired the research and inspired me to think that there must be more.

Eliza:  I absolutely adored studying at Actors Centre Australia. ACA really did train you to not take anything for granted. For my personal journey, it taught me a work ethic to become a storyteller, not just through acting and character, but through film, writing, genre, theatre and most importantly history.

ACA taught me to use storytelling technique, particularly with ACA tutor Anthony Skuse (Head of Performance). He taught us to really analyse and appreciate texts and the history in source material. He taught us to develop an appreciation for researching and understanding the historical context of plays, texts, poems and source materials. Really that is what Sheilas is all about. And that is so important and so valuable as a performer and as a writer. The ACA teaching team, including Adam Cook (Head of Acting) have been fundamental to my success.

Eliza: Comedy is a skill. I remember something that Scott Witt (current ACA Tutor) taught me and it stuck with me since “Never upstage a prop or a problem”. If there is a problem or you encounter a problem in your writing process, performance, training, then use it. In the book (Sheilas) if there was a problem I’d encountered, I’d make it a part of the joke or wit in my writing. Something else that I love to do is study my favourite comedians. Analysing their favourite jokes and really looking at the format and formula of them. Every comedian has a format and formula with their jokes. For Sheilas I was inspired by John Oliver and Samantha Bee and how they write about serious and complex characters and serious subject matter. They lay out the issue as it stands and I loved being able to do that for my book (Sheilas) as well. The problem or situation does not always have to have an answer.

Eliza: There were so many! You stumble across the funniest stuff in the research phase and I remember coming across a book about how to make Colonial Cocktail Recipes in the 1980s and it just had the weirdest recipes! One of them was an ‘Indigenous Porcupine’ recipe and it just had a strange mix of French ingredients.

Sheilas: Baddass Women of Australian History is published by Macmillan Australia and available for purchase online and via most books stores.